Poles-a nation under the cruelest occupation during II WW-were accused by some for not adequate help to Jews. Some even accused population of the conquered land, with no collaboratory representation-of a collaboration with their own oppressors against Jewish minority. The real description of facts and daily events in the occupied Poland, given by a Jewish witness-the political representative of Polish Jews party-was dismissing any such oppinions. 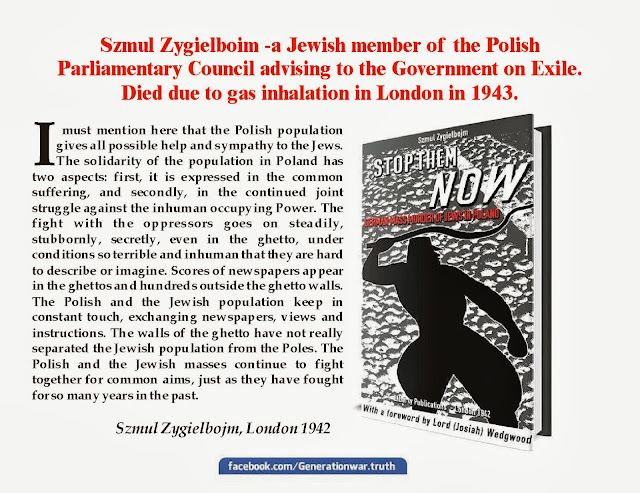 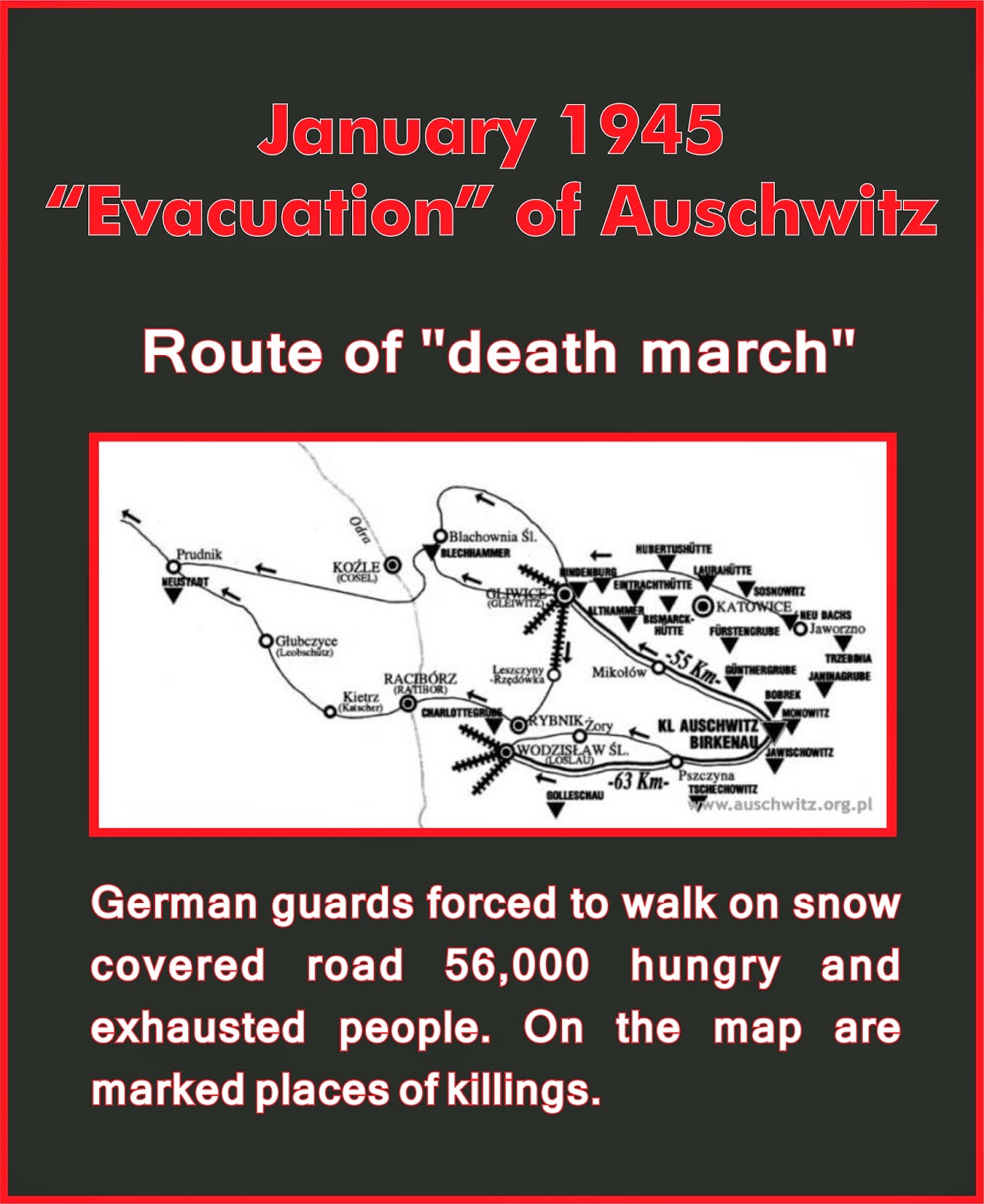 In November with the Soviet Red Army approaching through Poland, Himmler ordered gassing operations to cease across the Reich. Crematoria II, III, and IV were dismantled, while Crematorium I was transformed into an air raid shelter. The Sonderkommando were ordered to remove other evidence of the killings, including the mass graves. The SS destroyed written records, and in the final week before the camp's liberation, burned or demolished many of its buildings.
Himmler ordered the evacuation of all camps in January 1945, charging camp commanders with "making sure that not a single prisoner from the concentration camps falls alive into the hands of the enemy." On January 17, 58,000 Auschwitz detainees were evacuated under guard, largely on foot; thousands of them died in the subsequent death march west towards Wodzisław Śląski.
Approximately 20,000 Auschwitz prisoners made it toBergen-Belsen concentration camp in Germany, where they were liberated by the British in April 1945.
Those too weak or sick to walk were left behind. When the 322nd Rifle Division of the Red Army arrived at the camp on January 27 they found around 7,500 prisoners and about 600 corpses had been left behind. Among the items found by the Soviet soldiers were 370,000 men's suits, 837,000 women's garments, and 7.7 tonnes (8.5 short tons) of human hair. 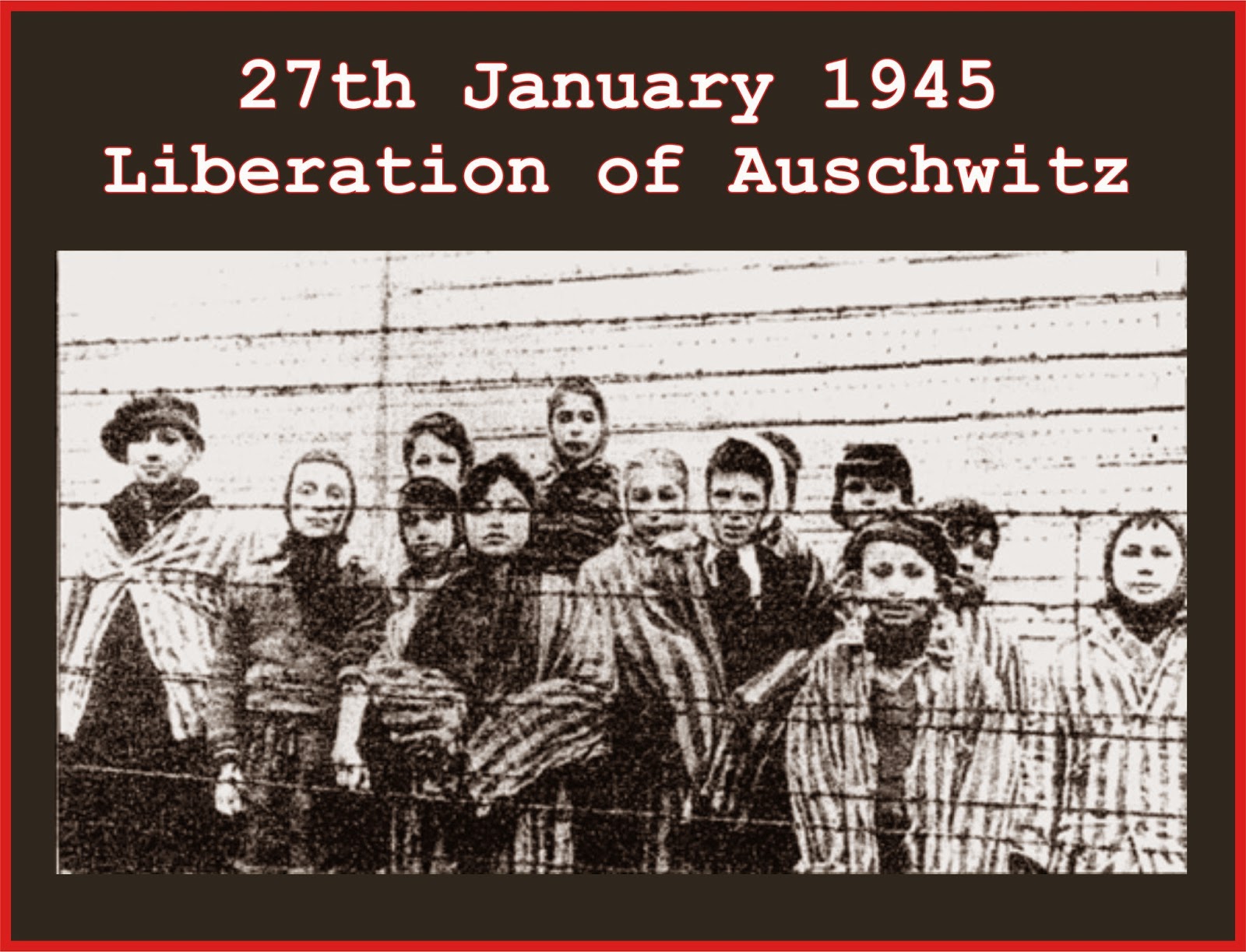 The almost 9 thousand prisoners, the majority of them sick or suffering from exhaustion, were left behind in the Main Camp (Stammlager), Birkenau, and the sub-camps as unfit to join the evacuation march. The SS intended to eliminate these prisoners, and only fortunate coincidences prevented them from doing so. The SS did manage to murder about 700 Jewish prisoners in Birkenau and the sub-camps in Wesoła (Fürstengrube), Gliwice (Glewitz IV), Czechowice (Tschechowitz-Vacuum) and Blachownia Śląska (Blechhammer) between the departure of the final evacuation column and the arrival of the Red Army.

Soldiers of the 60th Army of the First Ukrainian Front opened the gates of Auschwitz Concentration Camp on January 27, 1945.

In the Main Camp and Birkenau, Soviet soldiers discovered the corpses of about 600 prisoners who had been shot by the withdrawing SS or who had succumbed to exhaustion.

This photograph was taken at Auschwitz-Birkenau by Alexander Vorontsov, a Soviet photographer who accompanied the soldiers of the Red Army when they liberated the camp on 27 January 1945. The photograph depicts 13 children. Seven of the children have been identified.
Posted by Unknown at 12:59 PM No comments: 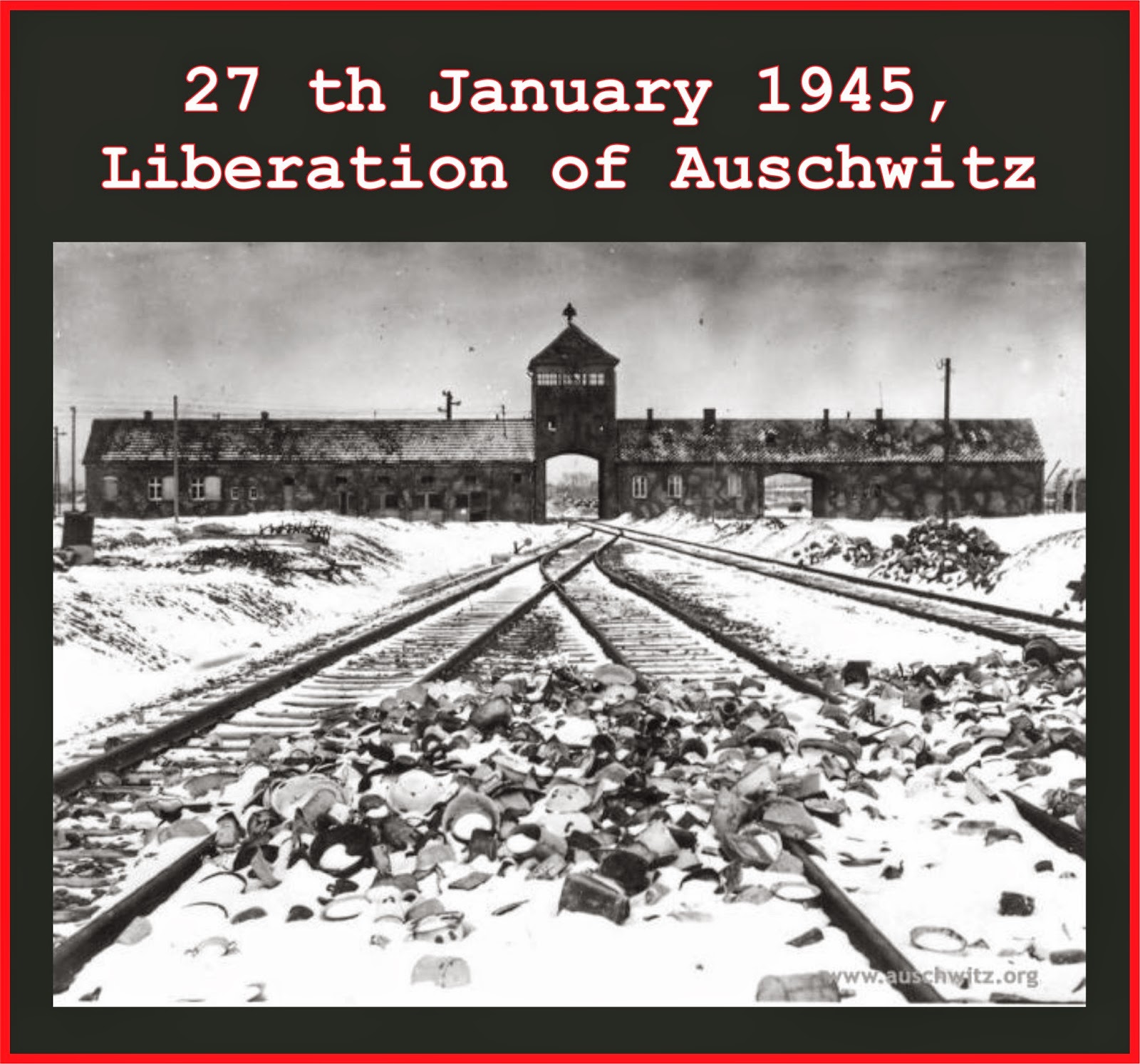 While they were leading the Auschwitz prisoners onto the evacuation marches and afterwards in January 1945, the SS set about their final steps to remove the evidence of the crimes they had committed in the camp. They made bonfires of documents on the camp streets. They blew up crematoria II and III, which had already been partially dismantled, on January 20, and crematorium V, still in operational condition, on January 26. On January 23, they set fire to “Kanada II,” the complex of storage barracks holding property plundered from the victims of extermination.
Posted by Unknown at 12:57 PM No comments: 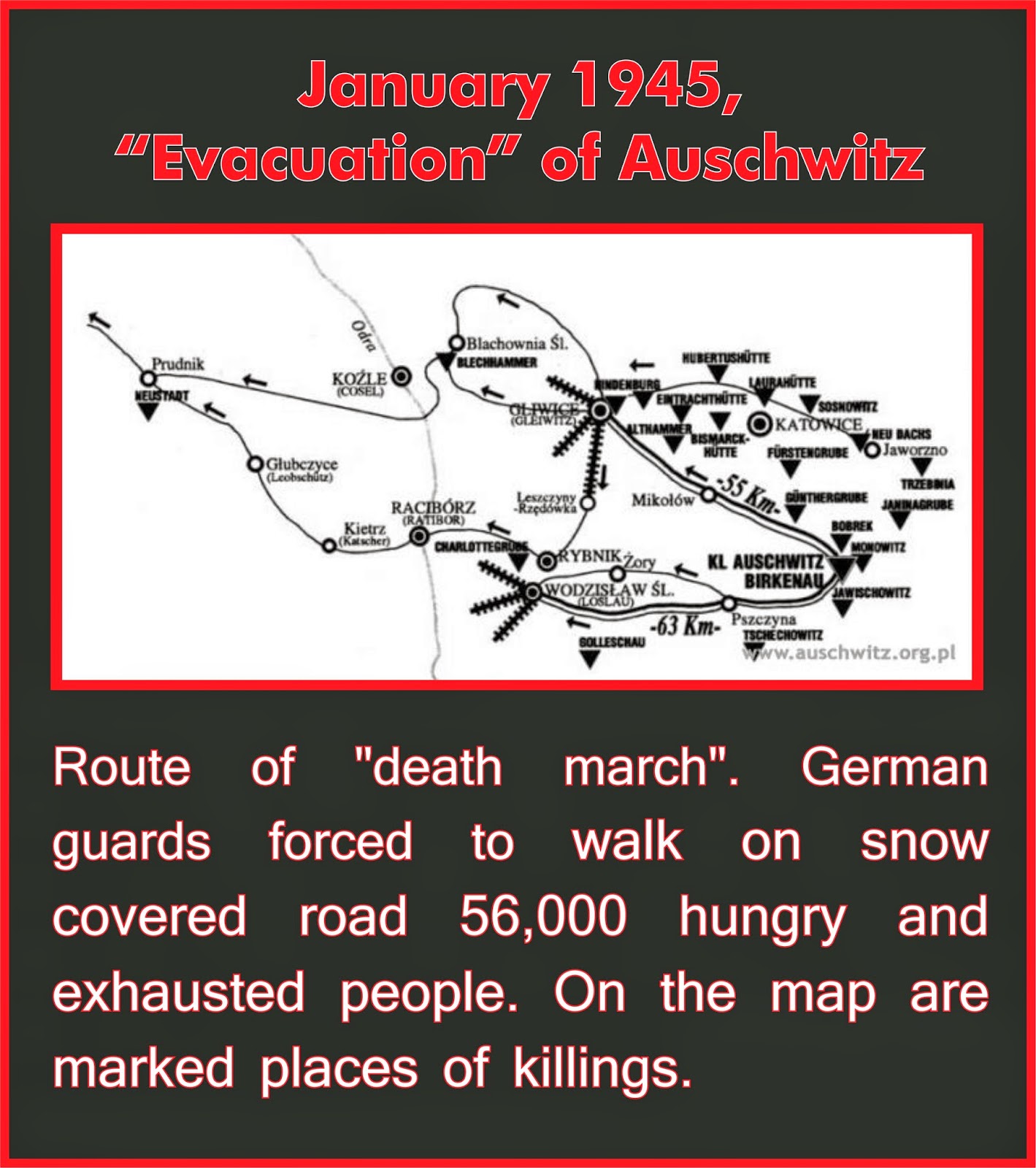 Leading from Auschwitz and its sub-camps.
From Auschwitz by Pszczyna to Wodzislaw Slaski and by Mikolów to Gliwice.
Posted by Unknown at 12:54 PM No comments: 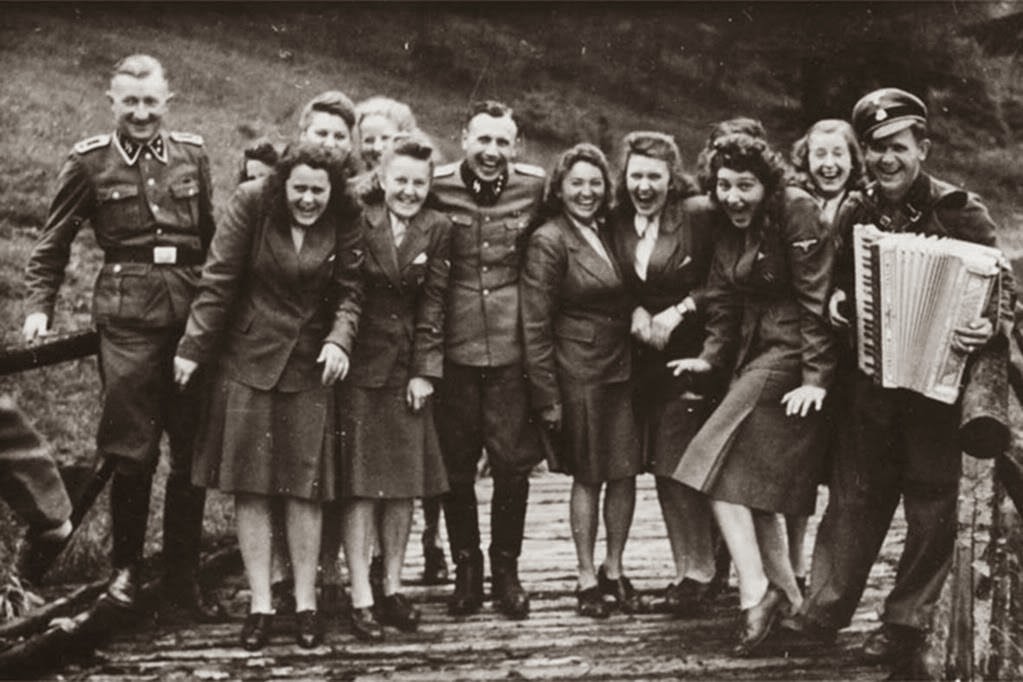 27 January - International Holocaust Remembrance Day. 70 years ago Auschwitz-Birkenau, biggest German death camp was liberated. This picture doesn't look horrible, there is no dead bodies, just a bunch of young Germans smiling because of a sudden rain. But in fact it is horrible, it's a picture of German women guards from Auschwitz with Karl Hocker in the middle (aide-de-camp of Richard Baer) relaxing themselves after a murderous, hard job. Picture were taken in a Solahutte, rest place for a death camp staff, 30 km south of Auchwitz.

Testimony of Fr. Edward Orlowski (complet-click):
The action of the final killing of the Jews was solely and exclusively the action of the Germans; Poles were forced to assist Germans guarding the barn under threat of loss their lifes. From the testimony of a Jew in a legal case before a regional court in Lomza, it is unequivocally apparent that the Jews were burned in the barn by Germans. At least three Poles were pushed into the barn and burned there, they were pushed by the Germans and burned there along with the Jews."


Intelligenzaktion, also called „Flurbereiningung“ was a genocidal action of Germany targeting Polish elites (primarily intelligentsia – teachers, priests, etc.). It was an early measure of the Generalplan Ost. About 60,000 people were killed as the result of this operation. ''Intelligenzaktion'' started on September 28th in the Bydgoszcz region with the mass executions in a village of Tryszczyn. During 2 weeks German paramilitary Selbstschutz executed over 900 Bydgoszcz citizens-Polish teachers, clergy, Boy Scouts, military and police officers, clerks, cultural and social organization members. Among victims were also Jews and local farmers. As a makeshift graves Germans used Polish trenches along the Brda River banks- the remaining after Bydgoszcz city defence. Victims were transported from the city prison in trucks, then led on foot to the trench. Killers shot them individually, putting a bullet into back of the head. 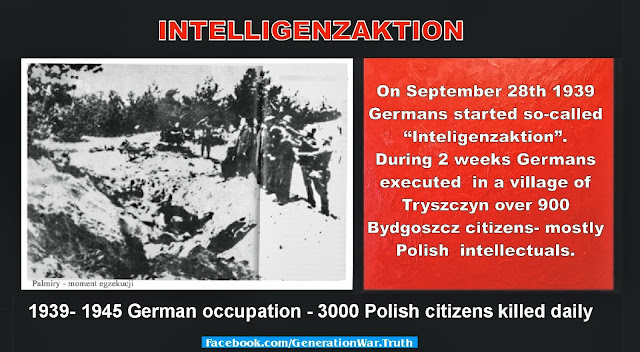 Posted by Unknown at 5:16 AM No comments: